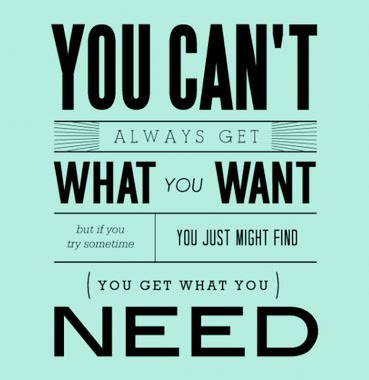 …you get what you need.

Back in July I was let go from a job in which I was miserable. It wasn’t a bad job, and I didn’t have a terrible boss. It was actually a pretty decent job, and I had a really intelligent, respected boss who was really good at what she did. It just wasn’t the right culture for me. I felt drained by it. I had been stuck in the same culture for 8 years and needed a break.

After my release into the wild, I thought this would be my opportunity to pursue my writing career, something which I have been passionate about since I was young, and something which I’ve been relatively good at my whole life (unless you count 11th grade when my English teacher told me writing wasn’t my strong point – but I don’t count 11th grade).

Over the course of the next 3 months I pieced together various opportunities. All of them contained writing responsibilities in some form or another so I thought I was on the right track. By the time my last severance check arrived, however, I had come to the realization that I would have to write 24/7 to make anywhere close to enough money to pay the bills, keep a roof over my family’s head, give money to those in need, and keep my son in private school (all things that are very important to us).

I swallowed my pride and went about the business of looking for full time employment again. I was looking for something different than where I had been. Over the past 13 years of my working career, I’d learned what I liked and what I didn’t like. I knew I didn’t want to work for a publicly traded company. I knew I wanted to work in a team environment. I’d learned I wanted to report to someone who was willing to take the time to help teach me the things I didn’t know, and cultivate the skills I already have.

Taking all these things into account (and more) I applied for several jobs, and sent emails to a few companies who I liked, but didn’t have positions available. One company, PSCU, who I have watched from a far for the last 5-6 years because of their dedication to employees, great benefits, and commitment to supporting health and wellness in the work place, called back in response to a position I applied for.

I passed the HR screening interview over the phone and was moderately interested in the job. We setup a follow-up interview with the hiring manager for the next day. By the time I got off the phone with my future manager, I was very excited about the position. She was in the process of building a new department that would develop new products for the credit union industry. She was looking to put together a small team that would work together using Agile methodologies to complete projects. I knew close to nothing about Agile, but I was excited by the idea of working with a small group of people, brainstorming ideas, writing all over whiteboards, creating mock-ups for new applications and services, and daily communicating about successes, failures, and ideas. It’s exactly the kind of environment I was looking for, and I felt pretty confident I had the job, but there was still the matter of the face to face interview.

PSCU contacted me the following Monday and we setup the 2 hour face-to-face interview. I was a bit nervous. I had no idea what we would talk about for 2 hours!

I arrived way too early for the interview and was left to sit, wait, and be nervous. A minute into the interview, I was set at ease, relaxed, and we had a 30 minute conversation about the job, my work history, and other things. Then she had a colleague come in and ask some questions. He went with the standard interview questions like,

After that 30 minutes of uncomfortable-ness, I felt like I had dug myself in a pretty deep hole. But, then we went for a pretty extensive tour of the campus which made me think I still had a pretty good shot. There’s no way I’d get the grand tour if I was just going to be shown the door. The campus is gorgeous, I was shown the area where I’d be sitting, and we talked about her plans to make a work environment more conducive to working as a team. Nice, wide open space, with room to meet. But, she told me, if I needed to, I could take my laptop anywhere on campus and find a nice quiet corner to work (even outside). So much different than places I’ve worked in the past.

After the tour, we sat back down, talked some more, and then she let me know that she was going to have HR make an official offer.

A few days later, when I got the phone call, I was blown away. They offered me more money than I was asking for, let me know I’d be starting with more paid time off (on day one) than I thought, and health benefits would be available sooner than I expected. The wonderful HR lady also told me about my eligibility for an annual bonus that’s paid out in December. Why? Because PSCU is a non-profit company and they give their extra money back to employees and customers every year. It’s not promised money, but it is there for the taking.

I’ve spent the last two weeks tying up loose ends, finishing up projects, handing off work, and learning as much as I can about the methodologies we will use to run our team. I officially start Monday, December 8th, and I can’t wait.

Is it what I wanted when I left my last job? No. Is it exactly what I need for the foreseeable future? Yes!

God has been so good this year, and I trust that he will continue to provide exactly what we need.

6 thoughts on “You can’t always get what you want, but…”

Other Places to Find My Writing

Other Places to Find Me